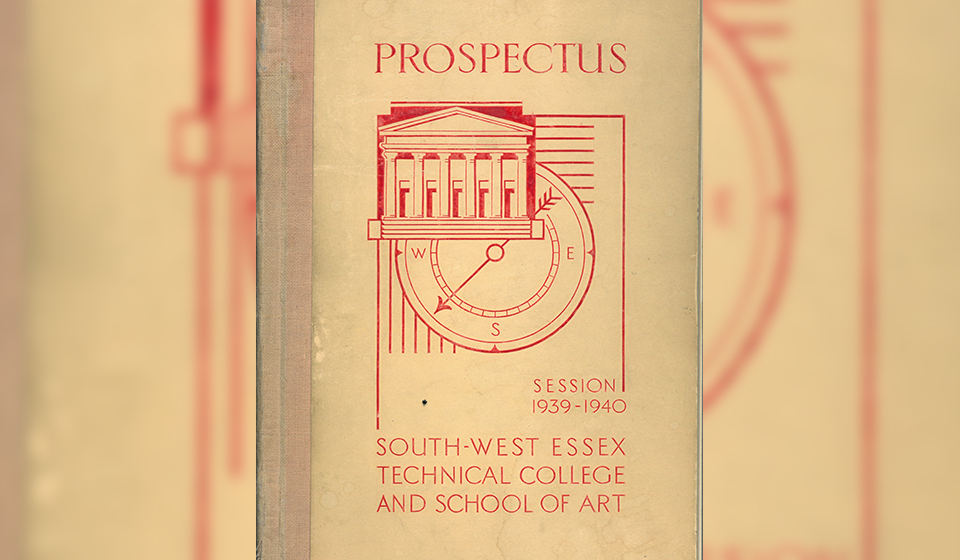 Believed to be the first produced by the College, the 1939-1940 prospectus certainly makes a statement. The front cover, designed by Mr L. Gordon Andrews A.S.A.M., A.M.D., Head of the Department of Industrial and Fine Art, has a simple, illustrative design with embossed print. The thickness of the guide indicates optimism and dedication to providing a full technical curriculum that the Essex region and the country had been lacking.

The front cover design flows well. The eye is drawn down beyond the title to an illustration of the imposing front columns and portico of the College. This simplified, almost architectural drawing of the College sits on an illustration of a compass pointing south-west. Behind the compass are six vertical and seven horizontal strokes. It’s possible the six vertical strokes symbolise the six iconic columns of the front façade, while the seven horizontal strokes symbolise the grand front steps. The design is nicely squared off using a stroke which helps draw the eye down towards the text ‘Session 1939-1940' before finally resting on the name of the College ‘South-West Essex Technical College and School of Art’.

The prospectus is 174 pages filled with general information about the College, fees, courses and other neighbouring institutions. A stand-out feature is a hardcover that hasn’t been replicated on any of the College’s guides since. The guide must have been expensive to produce, and it is unknown how many of them were printed, however, the existence of a notes section in the back suggests they could have been given out more widely than just key community centres.

Upon opening the guide, the reader is instantly transported back in time. The layout and order of information are far more formal than anything produced in recent decades. After the title page, the initial information provided is a roll call of the College’s leaders, including, members of the Essex Education Committee, College Governors and Principal. This is followed by a short ‘Descriptive Note’ providing background information about the College.

Following the College leaders is a roll call of departmental staff members, including, heads of department, lecturers, part-time instructors and assistants, as well as support staff. In total there are no fewer than 320 Staff split across the following departments:

An interesting quirk in the early years of the College was the payment of fees alongside a ‘Membership of the College’. Students studying a part-time day or evening course would be expected to pay a fee per session (session denotes the 1939-1940 academic year). This fee depended on the qualification studied and the number of classes per week but started from 7 shillings 6 pence (£15 in 2021) through to 30 shillings (£60 in 2021). As well as paying a fee for the session, students were expected to pay a 1-shilling (£2 in 2021) per annum fee to become a Member of the College. This membership entitled students to:

The 1939-1940 prospectus is very thorough in its description of subject areas and courses and there are hundreds of part-time and full-time courses listed. Each department’s section starts with a comprehensive introduction describing the College’s facilities, internal and external progression routes and locations of any classes, be they in the main campus or at one of the College’s over-flow branches in Walthamstow or Leyton. Following the introduction, the courses are listed, and the variety on offer truly made the College a “great community centre” as Dr H. Lowery said at the official opening in 1939. Courses ran from Monday – Saturday, some of which are outlined here to give an indication of the diversity of subjects:

It’s interesting to note that however many things have changed over the years, they have also remained the same. The ethos of the College in providing valuable technical education to students has remained true and there are many parallels between the courses taught in 1940 and the ones taught in 2021, albeit less of them. However, it must be noted that the nature of the courses differs greatly from those of the 1930s and 40s as technology has advanced and many industries that once existed have either evolved beyond recognition or become obsolete. Some of the more academic subjects such as maths, languages and history have also moved into 6th form colleges as A-Level qualifications and are no longer taught at the College.

It’s sad to reflect that the 1939-1940 session was interrupted so violently by the outbreak of World War 2. The printing of such an in-depth guide was almost certainly wasted insofar as many of the courses originally conceived would have been cancelled. However, it should also be considered that the great number of courses available, and therefore the equipment the College had on-site to run them, would have been a contributing factor in allowing the College to run a military training school alongside civilian education.

Finally, at the back of the guide, a series of photographs have been included featuring different classrooms and facilities of the College. And the back cover details the enrolment week dates and times for both part-time and full-time courses.