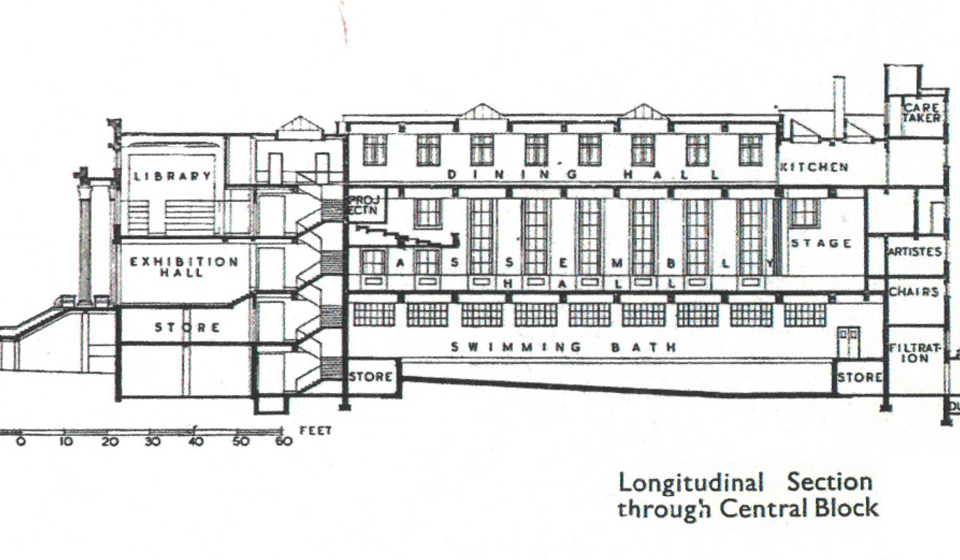 “Here, education will be more scientific than classical; more closely allied to industry. It will be a more practical type but though a different type no less inferior. I want to impress that upon all concerned. It will be of equal importance and equal status. Essex has been fortunate in having as its guides, some of the finest Directors this country has known. Essex from being in the backwoods, is now regarded as one of the most progressive counties.” - County Councillor Joseph Hewett, J.P., Chairman of the School Buildings and Supplies Sub-committee of the Education Committee, The Guardian, 1937.

Circa 1932, Walthamstow Borough Council was approached with an offer to purchase a site alongside Forest Road near the Sir George Monoux Grammar School. The site was originally part of the Chestnuts Farm playing fields, a section of which still exists behind the College today and is used for general recreation and council events.

In July 1934 the first architectural plans were submitted to the Education Committee (Bray, 1947, p.3). The plans were drawn up by Essex County Council Architect, John Stuart, F.R.I.B.A., who had also designed the George Monoux Grammar School (Fiftieth Anniversary Waltham Forest College, 1988) and had worked closely with the architect of the planned Walthamstow Civic Centre so the two new buildings would not clash (The Guardian, 1937).

On Thursday 8th July 1937 a special stone laying ceremony took place. The audience initially gathered at the top of the steps in what is now the reception area (then referred to as the Exhibition Hall), surrounded by metal girders and brickwork before moving down the main steps to view the stone laying by County Councillor Joseph Hewett, J.P., Chairman of the School Buildings and Supplies Sub-committee of the Education Committee.

Attendees were from the Council, Education Committee and the schools the College was to replace, Leyton and Walthamstow Technical Schools, the Walthamstow Commerical School for Girls and Leyton School of Art, among others:

After the stone laying, Mr P. Astins (The Guardian, 1937) was quoted as saying, many of those involved in establishing the College had “wondered whether they would ever live to see the foundation stone well and truly laid”. The statement was met with laughter, however, his sentiment was no doubt felt by many of the people at the ceremony. Through the few financially stricken years prior to the College being built and the many decades before, a great number of people had worked tirelessly to give technical education the attention and the facilities it deserved and needed.

Mr Hewett (The Guardian, 1937) described in his address how technical education had been “the Cinderella of the education system for a long time” and that “Cinderella is about to leave the kitchen and enter into her heritage. Our technical schools throughout the country have not been, and are not, of a nature that is at all creditable. Very often, with very few exceptions, technical schools are housed in budlings which are badly equipped and are nothing more or less than makeshift buildings.” Mr Hewett went on to thank Walthamstow Council who “most willingly came to the country’s assistance and placed [the land the College was built on] at their disposal”.

The original stone can still be seen on the right of the main steps as you face the College. When works were carried out to renew the steps in the 1990s, the stone was re-laid by then Principal, Mike Bourke.

After the stone laying ceremony, finalising the building of the College took around 15 months to complete. During this time a search for the College’s first Principal was successful with the appointment of Dr H. Lowery, M.Ed., D.Sc., Ph.D.,F.Inst.P., in October 1937, one year before the College was to open.

Dr Lowery had previous experience working as Principal of the North-West London Polytechnic in NW5 and before that he was a prominent figure at Manchester College of Technology. W.R. Bray (1947, p.4) says that Dr Lowery’s main research occupation was that of a research physicist, “so as Principal of what was to be one of the largest Technical Colleges in the country, and one which was to be largely experimental in its methods, the Committee were fortunate in being able to appoint one of the leading technical educationalists.”