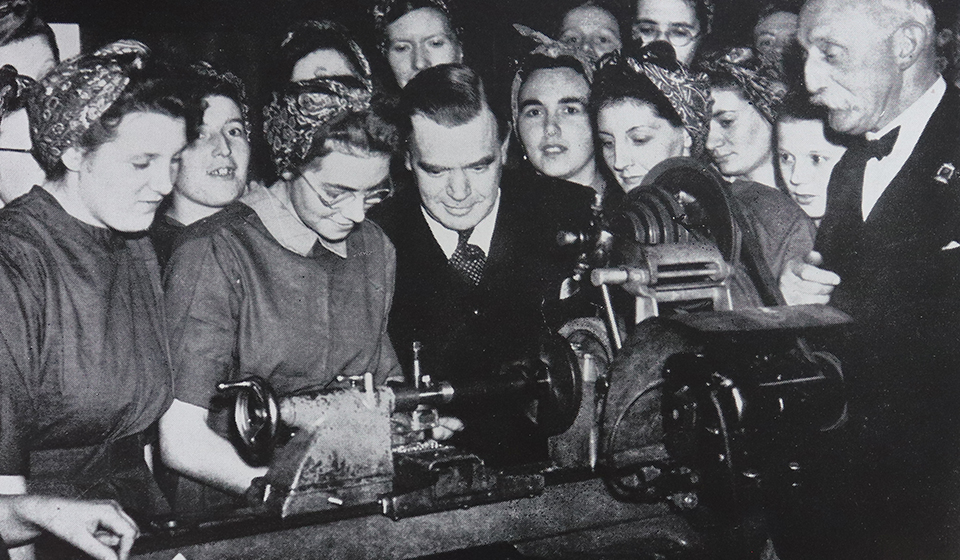 The title of this article references civilian women, which isn’t strictly accurate. As we know, during World War 2 there weren’t really any civilians in the wider sense. Everyone had a role to play in the war effort and the UK was often labelled the ‘Home Front’. Here, however, civilian women are defined as those who were not included in the Auxiliary Territorial Service (ATS) Women’s Auxiliary Airforce (WAAF) and Women’s Royal Navy Service (WRNS) who occupied the College during the same period.

During the war, female students were heavily involved in aiding the war effort through their classes or by organising and participating in various groups, clubs and organisations. In the period 1940-44 there was a heavy reliance on women working in the factories producing a vast range of equipment for all branches of the British Armed Forces and allies. Technical colleges across the country had the task of training these women and the South-West Essex College was no exception. During the 1940-44 period, about 700 women were trained in many aspects of engineering, such as fitting, turning, welding, milling, capstan operation and much more. W.R Bray (1947, p.51) explains how “the courses attracted a great deal of attention, and both the local and the national press carried articles and photographs of the women at work.”

Women were also introduced to some courses alongside men. In the 1942-43 period, the Science Department provided classes to train laboratory assistants for the Ministry of Supply Research Laboratories. Small groups of ten to fifteen students were selected from secondary schools and taught subjects including basic physics, magnetism, electricity and elements of radio. In all, about twelve of these groups were trained (Bray, 1947, p.54).

Women who were not selected for engineering or science work were often under the umbrella of Mrs L.A. Brazier, Head of The Domestic Science Department. It is this department that focused on the domestic side of the Home Front during the war and was extremely busy with work both inside and outside the many College branches.

As part of the Domestic Science Department, the first course for Nursery Nurses started in October 1941. Those who participated in this course were part of the Child Care Reserve and received a Nursery Nurses Diploma from the National society of Children’s Nurseries. The women of the Child Care Reserve were an essential part of the Home Front, allowing many married women who had children to work in the factories (Bray, 1947, p.55).

The Women’s Voluntary Service (WVS) were taught several specially designed courses. One such class was cooking which was attended one day a week for three months. Later this evolved into an emergency field kitchen course in which WVS members would learn how to cook in situations where houses had been bombed and no gas supply was present. In total, about 100 women attended this course at the College. Due to the absence of men on the domestic front a handywoman’s course was established and turned out to be quite popular. The WVS were taught the maintenance and repair of furniture, household equipment, plumbing and electrics (Bray, 1947, p.56).

The National Food Campaign was aided by the Domestic Science Department by providing lectures and demonstrations to women’s organisations and talks to canteen staff in workplaces. Between 1939 and 1942, these lectures and demonstrations started with how to make the best use of rationed and non-rationed food but, in 1943, the Board of Education asked the College to “extend our extra-mural activities so as to include Make-Do and Mend” (Lowery, 1943, p.16).

Make-do and Mend was part of the Government’s campaign during the June 1941 to 1949 clothes rationing period to encourage people to repair, reuse and reimagine their existing clothes during the Second World War (Make Do and Mend, 1943. Clothes Rationing in Britain).

The main local base of Make-do and Mend was the College and, initially, almost all the classes were delivered from College grounds. However, it was realised that some of the villages in the region were too far away from the College for easy attendance and were too small to house a demonstration shop. So, in one of the many departmental collaborations at the College, the Automobile section of the Engineering Department sourced and overhauled an Austin Six while the Department of Architecture and Building designed a special body to produce a demonstration van so that people in remoter parts of the region could access Make-do and Mend classes (Lowery, 1943, p.17; Bray, 1947, p.60).

Bray (1947, p.60) recalls, “[The] body [of the vehicle] had rather the appearance of a caravan, and contained cupboards, oil stoves and so on. The specially ingenious features were that the sides let down and formed windows in which was a display of Make-do and Mend goods, while the back let down to form a small platform so that demonstrations in cookery could be given to small crowds who would all get a good view, the platform being raised from the ground.”

The van wasn’t the only outreach programme used by the local authority and council to educate the public. As mentioned above, in some cases demonstration and information shops were established in towns. A shop in Hoe Street was open for a year along with other shops that appeared for varying lengths of time in Chingford, Epping and Loughton. Bray (1947, p.58) shares that “many of the anxious enquirers were men whose wives and families had been evacuated and who were experiencing varied housekeeping difficulties. Their enquiries covered a wide range, but perhaps the most amusing was the case of the gentleman who brought along an omelette he had made for criticism.”

Lowery (1943, p.16) stated in the 1943 Annual Report, “I am pleased to report that the new venture in Make-Do and Mend classes was enthusiastically taken up by our own women staff and was well supported by students of all kinds. Old garments were renovated or re-made, children’s toys were produced from materials that would otherwise have been regarded as scrap, and the foundations of “true domestic economy” were securely laid.”

One last mention in this section goes to the College Knitting Party which was established under the leadership and regular attendance of Mrs. Lowery (wife of Principal Lowery). Dr. H. Lowery makes mention in Annual Reports 1940-41 through to 1944-45 of “the large quantities of comforts [being created] for the Services and Life-Boat Crews”. This effort appears to have increased year-on-year with a mention in 1944 of individuals producing up to 50 pairs of sea-boot stockings and large numbers of socks with 1945 increasing to over 70 pairs. In the 1946 report, the first full-year since end of the war, Lowery (1946, p.13), mentions the continuation of the Knitting Party, although expresses the difficulty of gaining access to the necessary supplies of wool. It also appears in 1946 the products produced were making their way to Deep-Sea Fishermen for the first time. W.R. Bray (1947, p.94) mentions “it is pleasant to record that letters have been received from all parts of the world expressing thanks and appreciation of the work of this group of ladies.”