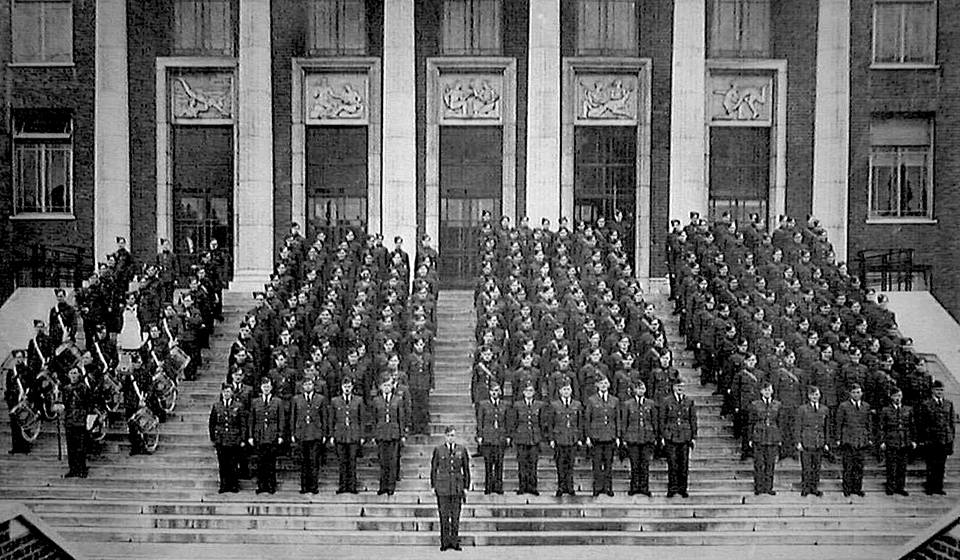 The end of 1939 was a period of intense negotiation. The first round saw the Principal and Governors on one side negotiating with various Government Departments to try and maintain the College as a place of education and not to convert it to a hospital or other use. These were successful and the College could remain open to civilian education under the condition it would also train men and women from the military.

The second round was with various military departments and involved finding out what courses the College could provide (considering staff, equipment and facilities) to best suit the various branches of military needs. An agreement was reached and on 11th January 1940, just over 100 British Army soldiers entered the College to begin training (Bray, 1947, p.19). These 113 were the first of over “12,000 service trainees to pass through the College, a number which is claimed as a record unbeaten by any similar institution in the country” (Bray, 1947, p.18).

The troops were not only training at the College, but it was also used as accommodation. Classrooms and staffrooms in the basement (now ground floor) were reserved as living quarters and most of the rest of the floor was taken over by soldiers for classes. Troops would make use of the College Refectory of which Major D.W.T Gysser, D.C.M., Royal Fusiliers, Administrative Officer in charge of troops training at College, praised the very efficient way Refectory staff organised the catering arrangements and excellent quality of the food (Bray, 1947, p.19) – high praise coming from the military!

Although the Army sent the first troops to train at the College, it was originally meant to be the RAF who would join on the very early date of 23rd October 1939. There had been various meetings between college Principals and the Air Ministry and Dr H. Lowery had sent a summary of accommodation available and a list of equipment the College would need to provide effective training of troops. Some of these items included, Air-cooled and liquid-cooled engines, a chassis in use by the RAF and appropriate blueprints, if available.

On 20th November, Dr Abbott of the Board of Education wrote to Dr Lawrence, Chief Education Officer that “the absence of heavy casualties and the low rate of destruction of machines have rendered many of the projected training schemes of the Air Ministry either redundant or unnecessary, and among these are the plans for Walthamstow and Dagenham.” (Bray, 1947, p.33).

In hindsight, this appears to have been an error on the part of the Air Ministry as less than a year later the UK would be subjected to The Blitz and would require as many aircraft as it could possibly field. By the end of 1940 RAF troops did start to arrive at the College and begin their training in radio mechanics, engine and air-frame maintenance (Fiftieth Anniversary Waltham Forest College, 1988, p.8).

Servicemen and women numbers were increasing at a rate that was not sustainable for the College to both train and house and so space was found at the Sir George Monoux Grammar School. The school had been evacuated and equipment already requisitioned by the College and so was temporarily mothballed. On the troops' first night in the school a parachute mine dropped close by and, although it wasn’t a direct hit, much damage was done to the building’s roof and windows (Bray, 1947, p.23). A rude awakening after having moved in only a few hours earlier.

As troop numbers increased, more locations throughout Walthamstow were taken over for training, including the then newly built library on the corner of Forest Road and Wood Street.

During this time the College had to move very quickly and often make changes to staff and facilities at very short notice. W.R. Bray (1947,p.21) mentions that “it was commonplace to find that out of 120 Motor Vehicle Mechanics, 60 would turn into Welders the day before their expected arrival, while of the other 60, 45 would turn out to be Electricians.” This meant College staff often went through courses themselves so they could be adaptable and train any number of disciplines they were not specialised in. As a result, many staff found themselves with a far wider experience of trades at the end of the war than they had going in.

The arrival of the RAF brought with it a whole new set of equipment and staffing problems. Mr R.W. Jukes, B.Sc., A.R.I.C, Head of the Science Department was tasked with delivering the radio mechanics classes. His first task was to locate more instructors. Two members of the regular physics staff were utilised, along with help from physics specialists from the local secondary schools. Four members of industry were brought in and even one member of the Art Department who had experience in short-wave broadcasting (Bray, 1947, p.34). Great assistance was found in the form of Ft.-Lieut. A.H. Brown who came with the first group of RAF trainees. W.R. Bray (1947, p.34) praises Ft.-Lieut. Brown for the “invaluable work [he did] at the College in the early days of the courses, training the staff in the highly specialised and previously some-what secret aspects of maintenance of RAF radio equipment.”

Equipment for the RAF courses was in short supply and almost non-existent. Thankfully, the Government set up a supplies department at South Kensington and once this got underway the College had a steady supply of various components and equipment, including, cathode ray oscilloscopes, meters and raw material for soldering and brazing (Bray, 1947, p.35).

Late 1942 saw the RAF running low on recruits that had the education standard required to be part of an air crew. As a result, a new set of courses were established called Preliminary Air-Crew Training Courses (PACT) and included subjects such as, English, maths, physics, geography, technical drawing, modern history and current affairs. Overall, 350 men went through these courses split in ‘flights’ of 25. Due to yet more lack of space, The Salvation Army Hall in Hoe Street was used for many of these classes (Bray, 1947, p.37).

So far, we have not made mention to the women who had arrived at the College alongside their male counterparts. Over the course of the war members from the Auxiliary Territorial Service (ATS), Women’s Auxiliary Air force (WAAF) and Women’s Royal Navy Service (WRNS) would attend the College for training in a broad range of subjects.

The first to arrive alongside the Army were the ATS. In 1941, training was provided by the Commerce Department and started with typewriting, English and arithmetic (Fiftieth Anniversary Waltham Forest College, 1988, p.8). The army is known for its coordination which requires significant administrative staff so, as a result, the Commerce Department expanded its provision and included general knowledge, army administration and organisation. 500 women of the ATS and 150 men were trained in these classes at the College over a four year period (Bray, 1947, p.27). In 1942 the first members of the ATS began training as Welders and Instrument Mechanics (Bray, 1947, p.24).

Due to the increased recruitment of servicemen and women into the forces, there was an increased need for trained cooks. From 1941, under the direction of Mrs L.A. Brazier, a steady stream of WAAF members took five week intensive cookery courses at the College. These courses were designed to train cooks under all circumstances from properly equipped kitchens to emergency field kitchens. Nearly 300 members of the WAAF were trained on these courses at the College (Bray, 1947, p.29).

In 1942 the Royal Navy and WRNS arrived at the College. Upon their arrival, the College was designated as HMS Shrapnel (a plaque commemorating this can be seen at the top of the College main steps). The Royal Navy was the only branch of the military that continued to use the College for training after World War 2, although this did end in May 1947.

The first members of the Royal Navy to arrive were part of the Fleet Air Arm. As a result, the training provided was replicated from the RAF classes. This certainly made a third branch of the military arriving at the College easier to manage. As time went on the Royal Navy had a need for radar to be fitted to ships and so required a great number of trained maintenance workers (Bray, 1947, p.43).

It should be noted that of all the branches of the military that went through the College, the Royal Navy and WRNS were the only ones that had both the men and women treated in complete equality. Men and women took the same courses in the same classes and at the end took part in the same examination. The only difference was the selection of recruits. Members of the WRNS were selected based on previous academic accomplishments, whereas the sailors had to take two tests (Bray, 1947, p.43).

The importance of the College in training the Royal Navy and WRNS recruits cannot be overstated. As W.R. Bray (1947, p.44) states, the arrival of Headmaster-Lieutenant L.C. Toms, B.Sc., R.N. (part of the North Russia Convoy Runs) to the College “shows the importance [of the courses] in the estimation of the Naval authorities.”

Education of the military during the war, as with civilian training, didn’t end at the College gates. Many staff were dispatched to lecture at searchlight stations, gun sites and RAF stations. In the 1940-41 academic year over 300 lectures were given (Lowery, 1941, p.10). However, these lectures started to drop off during the 1941-42 session.

These off-site training schemes were adjusted and as a result increased significantly during the 1942-43 academic year seeing whole courses, as opposed to individual lectures, being delivered to servicemen. Also, for the first time, training was delivered to women in the ATS at various sites including, childcare, domestic subjects and Make-do and Mend.

W.R. Bray (1947, p.28) recounts the members of staff who “travelled the countryside by day and night, in summer and winter, in bright sunlight and in the darkest black-out. At times the lectures were rudely interrupted by the call to Action Stations.” He also recalls several members of staff arriving at gun sites that had been deserted who then had to make the long journey back to college.

Towards the end of the war various rehabilitation courses were set up for men and women who had served so they could better transition back to civilian life. For the ATS and WAAF there was a great demand in childcare and domestic subjects alongside courses involving glove and slipper making and the art of wearing clothes, correct use of makeup, and furnishing. Whereas, for the men, the Engineering Department provided a large range of workshop courses (Lowery, 1945, p.13; Bray, 1947, p.40).

One final mention in this section of history is the establishment of the Air Training Corps (ATC) on 5th February 1941. Walthamstow 1014 Squadron was soon established, and many members went through the College on technical courses. Within the first 12 weeks 31 proficiency certificates were granted (Lowery, 1941, p.12).