Research and Production at the College During World War 2 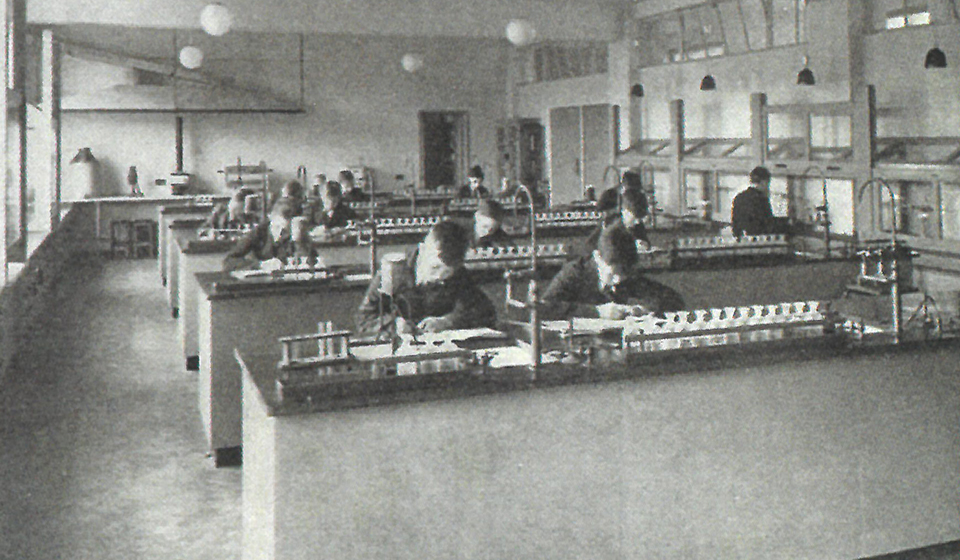 During the early years of the war, while factories across the country were being organised and transformed into a war-time industry, Colleges across the country were encouraged to use their facilities in the production of goods useful for the war effort. This was especially the case after the Dunkirk Evacuation in June 1940. Later, as the war-time industry came into full-swing, colleges were no longer required for production and were told to focus on education. Dr H. Lowery (1942, p.20) believed that the production the College did continue with throughout the war provided a “beneficial effect upon the students, as they find it much more interesting to feel the work they are doing has got some final value.”

During the height of production, the Engineering Department, under the supervision of Mr H.J. Cooper, Head of Department and Mr F. Laker, Senior Workshop Assistant, was running 24 hours a day in 8 hour shifts. Various items produced were, electrical components, service instruments (in conjunction with Henry Hughes of Barkingside), gauges and jigs for the Royal Arsenal and Pyrometers for Tinsley of Norwood.

To show the public the extent of production and training the College was undertaking, an exhibition was held on 24th October 1941. The exhibition was opened by Colonel Gilbertson Smith, T.D., D.C., Chairman of the Essex County Council and also attended by Mr George Tomlinson, M.P. (Lowery, 1942, p.14).

Alongside the production of goods, the College staff and students were no stranger to research. The Commerce, Women’s and Science Departments were all engaged in research, some related to the war-effort, much of it made possible by the loan of equipment from other organisations, such as the Royal Society and the University of Manchester. Dr H. Lowery (1943, p.19) mentions that alongside publicly available research, “The Engineering Department has been carrying out some industrial investigations of a confidential nature.” And later in the same report mentions, somewhat secretively, the war-time research for the iron and steel industry he and Mr D. J. Price, B.Sc. were conducting. W.R. Bray (1947, p.85) reveals that the work Dr Lowery and Mr Price were working on was the “investigation into methods of measuring infra-red emissivities for the purpose of obtaining data for more accurate temperature control in the manufacture of such steels.”

Mr Price went on to be awarded a Commonwealth Research Fellowship, the first awarded to an individual trained solely at a technical college.