Official Opening of a Progressive and Controversial College 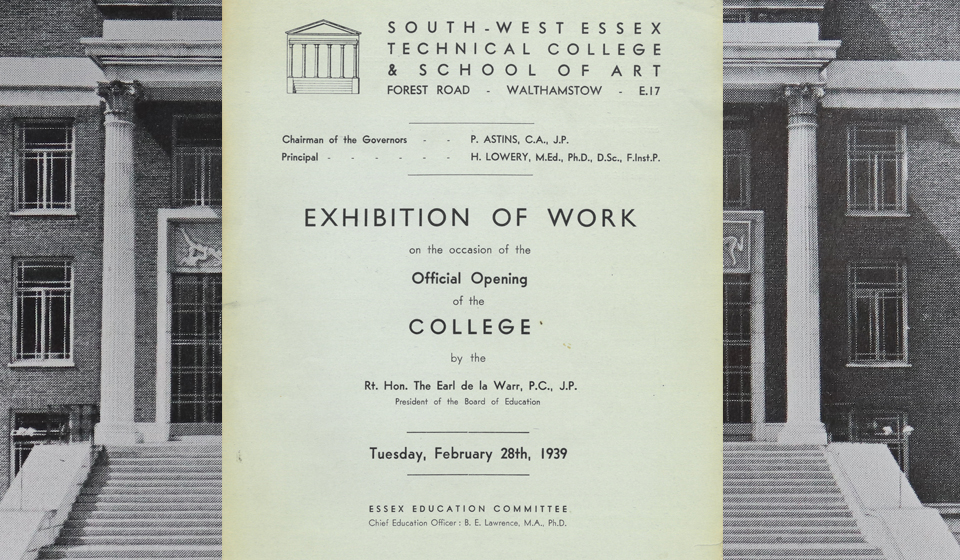 “The task of building up a skilled, healthy and intelligent body of workers is equally important for war or peace. No victory, however complete, will enable us to survive as a great power if we lack it. And if as we all hope, there is no war, then the normal rivalries that always existed between nations will continue, and it will be by this standard that both nations and their systems of government will rightly be judged.” - Herbrand Sackville, Rt. Hon. The Earl De La Warr, P.C., J.P., speaking at the Official Opening, quoted in The Essex Chronicle, February 1939.

The first few months after its unofficial opening on Monday 3rd October, the College was still undergoing construction work both inside and outside. The overrunning of construction work, combined with last-minute equipment acquisitions, meant the Official Opening was pushed back until Tuesday 28th February (South-West Essex Technical College & School of Art, 1939).

The College was officially opened by Herbrand Sackville, Rt. Hon. The Earl De La Warr, P.C., J.P., (London Daily News, 1939, p.3). Lord De La Warr, President of the Board of Education, was a great advocate for technical education institutions. He emphasised that where technical facilities had been opened, they had filled up quickly with students. News coverage at the time suggests that authorities doubted him, but due to the vast numbers of enrolled students, Lord De La Warr should have been “glad of this example, for he will use it in many of his speeches when visiting other districts. He is convinced that there must be more enterprise in technical education to equip Britain to meet foreign competition (Northants Evening Telegraph, 1939, p.5).”

At the ceremony, Lord De La Warr said he was convinced that “in many cases, the inability to obtain or to keep employment between the ages of 18 and 30 was the direct result of what happened during the period between the ages of 14 and 18 years. Those who made use of such a college might sometimes fall into unemployment; but they need never become unemployable (The Essex Chronicle, 1939).”

Others who attended the Official Opening included:

All who attended the Opening Ceremony were excited for the future of the College and of education. Miss Tabor (The Essex Chronicle, 1939) said she hoped that the progress in technical education in the second quarter of the 20th Century would be known to historians as a remarkable event.

Lord De La Warr commented that he believed having education for all ages under one roof would increase the value of education. It would show that “education was not just a stage of life to be passed through and left behind, but a part of life itself; and that at no age is one so old or so knowledgeable that there is not plenty left to learn (The Essex Chronicle, 1939).”

This same sentiment was the rationale behind having many different subject areas in the same college. It was hoped that having art, cooking, engineering and science students (among others) all working together closely would benefit everyone.

Dr H. Lowery, summed up the ethos of the College, "We want to make it the people's university. The alternative to academic secondary education that we are going to offer here is the sort of thing for which educationalists have been crying out for years. We are not just preparing for examinations. We want to give people a sound knowledgeable background and training on all sorts of subjects. We want to feel that this is their place, a great community centre (Fiftieth Anniversary Waltham Forest College, 1988)".

However, the College did not get built, nor operate, without controversy. In The Essex Chronicle (1939), Miss Tabor mentioned the number of times she had been asked, “Why do you want such a great building? It is such a waste of money.” Her response was to highlight that the building was not big enough, as it had already overflowed to the old buildings and that “the amount spent here will be one of the best investments the country has ever made.” Other commenters suggested the College was a “white elephant” (Bray, 1947, p.4).

One aspect of college life that attracted the attention of some, including The Daily Mirror, was the progressive introduction of the College Nursery, open from 2pm-5pm, specially adopted to allow mothers to come to classes while a trained nurse looked after their children (A Special Correspondent, 1938, p.5). One official at the College told the Daily Mirror (1938, p.5), “We also have a handywoman’s class. That is useful for wives whose husbands are not very ‘handy’ about the home.”

In 1939, after the Official Opening, The Daily Mirror ran another article about the College, “They Educate Wives, Mind Babies”, focusing again on the College nursery. The newspaper mentions that “young moderns, who can leave even tiny babies in the charge of a trained nurse, are giving the officials a surprise. Many of them insist on learning mechanics. “It’s amazing,” the Daily Mirror was told by an official. “I suppose these young women want to know how to repair a washing machine or a vacuum cleaner (The Daily Mirror, 1939, p.17).” How wrong that official was, as less than a year later women would be at the forefront of mechanics and engineering as part of the war-effort on the Home Front.

In contrast, a statement by Mrs V. Lawrence in the Daily Mirror (1939, p.17) emphasises just how vital this nursery was for the community and women’s education, "I come here every week to learn dressmaking. I could not leave my son, Derek, who is four, alone in the house. It is a great help to be able to bring him with me and know he is well looked after while I am learning."

Despite some scepticism and conservative views, the College was an initial success as indicated in the journal, Nature (1940, p775-776), “The success of the College and the demands for its teaching are a credit to all concerned. It may well be a model for a substantial advance in education elsewhere.”

The Opening Ceremony was also accompanied by an Exhibition of Work, with demonstrations and exhibitions from many subject areas. From drawing to music, woodworking to physics and hydraulics to beekeeping, there was something for every guest to enjoy as they explored the many floors and corridors of the College. After touring the facilities guests were invited to the Principal’s Inaugural Lecture, This College and the Changing World, followed by an Organ Recital in the College Hall (South-West Essex Technical College & School of Art Exhibition of Work, 1939).