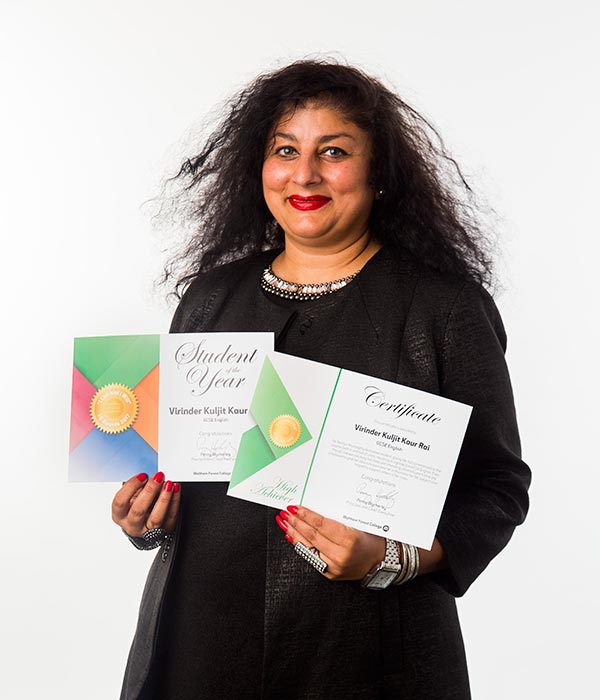 A mature undergraduate student who gained a top exam grade while studying a GCSE course at Waltham Forest College.

Student, Bimmy Rai, 48 from Leyton, achieved the highest grade, in her GCSE English Language exam at Waltham Forest College after it was re-marked by assessors.

She was already a student at the University of East London (UEL), and she now wants to do further study to become an English Language and Literature teacher.

A delighted Bimmy commented: “It was an extremely challenging year for me on all fronts. But I relished the opportunity to do the best I could as I love the English Language and I’m passionate about teaching.

“I decided to take the calculated risk of getting my papers remarked and I have received some wonderful news. I was awarded a grade 9.

“The teaching team, were fantastic and so supportive and I want them to be officially thanked.”

Bimmy had already done her GCSEs in the 1980s but decided to take English again after she discovered that her original certificates had been lost in a fire at her school in Derbyshire.

She enrolled on adult evening courses in English and maths classes last year at the College. In August, she was awarded a grade 8 in her English and applied to have her result re-examined by assessors.

She was already in her second year as a Business Administration degree student at the University of East London. She worked in the past as a project manager and is currently doing freelance work. She is also tutoring young people on Saturdays.

College Principal, Penny Wycherley told Bimmy: “When I had heard about your result, it was the icing on the cake for us this year as the College students have done so well.

“Thank you so much for this it is always wonderful to have appreciation for our staff.” 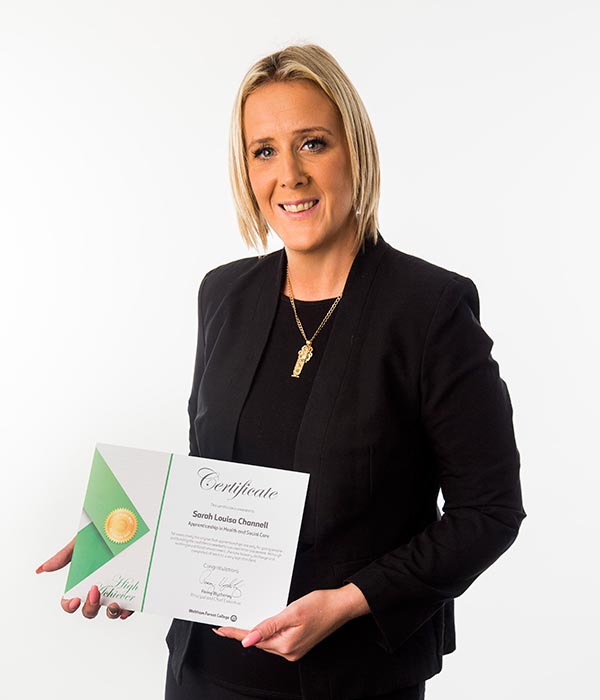 Two years ago, she decided that she needed to change her life and applied online for an apprenticeship course at the College. Her application was accepted and she has not looked back since.

Sarah completed a two-year, Health and Social Care Level 2 course with one day a week at the College and four days working at Trinity London Care. She worked as a support worker helping adults with autism and complex learning difficulties. After completing her studies, she continued at the day care centre where she is one of 25 staff looking after 17 service users.

She said: “I love what I am doing and wish I had done it years ago. The work is challenging but I love it. What I really like is when I help someone with learning difficulties make a sandwich, for example, and when it’s finished you see the happiness on their face. It’s amazing! The simplest thing we do can be a thousand times harder for adults with learning difficulties.

“Before the course, I was a full-time mum for 18 years and then decided to take a job at a supermarket. I did online ordering and customer service. It just wasn’t me. Although I worked in retail for years, I felt the job was mundane and exhausting. There was no job satisfaction. I thought, well, you are never too old and took the step to go back to college. Thank God, Waltham Forest College took me.”

I realized I could do it!

She said: “The tutors were fantastic. They helped me pass my maths. I’m dyslexic, which has always held me back. I didn’t go for anything before because I thought I’d fail. But thanks to the support and encouragement at Waltham Forest College, I realized I could do it! In fact, the whole atmosphere at the College made me feel alive again.”

Her new found love of education has encouraged her 18-year-old son. He has passed his Accounting and Finance Level 2 course and now wants to go to Waltham Forest College in January 2018 to complete his Level 3.

Sarah said: “My education has encouraged my children to do more. My son thinks if I can do it, so can he.”

The course at Waltham Forest has no formal entry requirements but good written and spoken English is needed. A successful enhanced criminal records check is also needed. The course includes: communication, personal development, equality and inclusion, duty of care, the role of the health and social care worker, safeguarding and protection, health and safety and handling information. Learner’s performance is assessed at the workplace. 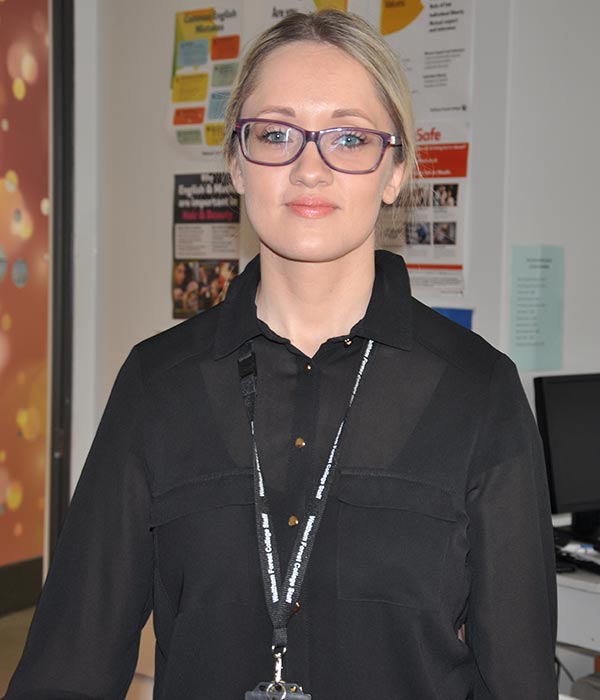 Cassandra Hajdar, a young woman based in Havering borough, was a student at the College and is today lecturing there.

She said: “I had such a good experience during my studies at Waltham Forest College. I had a fantastic teacher who made me feel relaxed. It left a lasting impression so that thirteen years later I was happy to return and work here.”

Waltham Forest College helped Cassandra progress in an industry that she was interested in since she was a teenager. At school in Chigwell, she helped out her brother who managed a beauty salon. She worked there in the evenings and on Saturdays and the experience gave her an insight into the industry.

After leaving school, she went to a specialist college to study her Level 2 in beauty. She did valuable work experience at a salon in South Woodford but found she did not have a very good college experience. She decided to continue her Level 3 at Waltham Forest College.

Her training and work experience there helped her to become a manager of various beauty salons from her early twenties. She even went to Dubai in the Middle East. She said: “I worked in the centre of Dubai for a skin care company. A lot of people spoke English there. I was there for six months. It was a fantastic experience to work with people with different culture. But I came home because I was home sick.”

My passion led me

Cassandra found her work was gently pushing her into teaching. She said: “For two years, when I mentored other people and explained the trade to them, I was being told that I should be a teacher. I learned a lot and I was at a point that I needed to stimulate my brain. I had knowledge that I could pass on to other people. I realized that my passion led me to teaching even though I enjoyed working as a therapist.”

By 2010, she gained her teaching qualifications. She received her Level 3 Award in Preparing to Teach in Lifelong Learning Sector and Level 3 Assessing Vocational Achievement. She was thinking about teaching at Waltham Forest and kept an eye out for job adverts. She applied to one in August and after a job interview and doing a presentation, she started working at the College in October.

She said: “I was surprised how much the College had changed. It looked a lot brighter and modern. It felt a bit surreal. I get a lot of satisfaction teaching students. I can’t wait to see my students passing their exams and progressing in their career.”

Beauty therapy is about treating the whole body, the face, nails, feet, hair and skin, so that there is long-term improvement. Therapists advise their clients about health and skin care. They also can find themselves being an amateur counsellor who listens to their clients’ life problems. 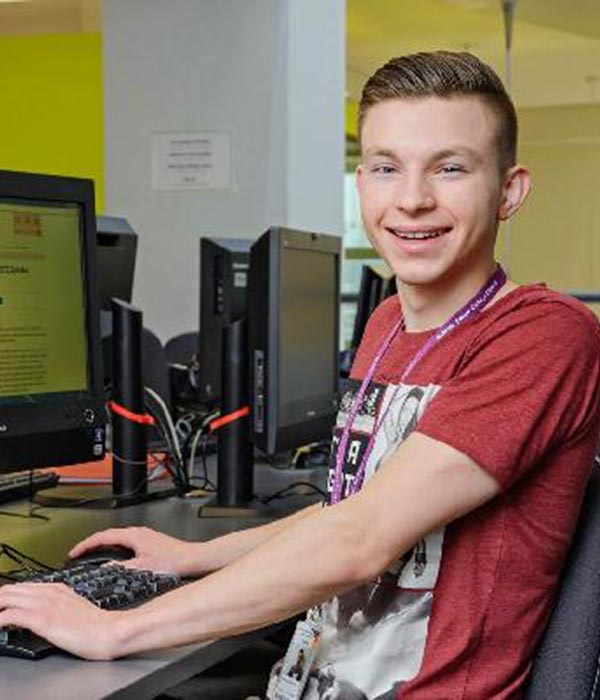 Jakub Jeziorski has won a place at one of the country's top universities by spurning A-Levels and taking the BTEC route to success.

He scored a triple distinction, each with a star rating, in IT BTEC Extended Diploma Level 3 course at Waltham Forest College.

His triple D* score is worth 420 UCAS points, which is equivalent to achieving three A* grades at A-Level.

Now Jakub is setting off to Kings College London, a prestigious Russell Group university, to study for a degree in Computer Science.

The Russell Group comprises Britain's 24 leading research universities, including both Oxford and Cambridge.

“I was so happy when I got my results with the highest possible grades,” he said. “Kings College London is one of the top universities in the country for Computer Science and I am so proud to be studying there.”

His achievement is all the more remarkable because he spoke very little English when he first arrived in London from Lublin in Poland four years ago.

He first came to Waltham Forest College to study ESOL (English for speakers of other languages). "German was the language I had learned at school and I could not speak English at all. I had to get a friend to fill in my enrolment form," he explained.

"From there I moved on to studying IT at Level 2 and then progressed to the Level 3 course. I am so glad I chose to do BTEC courses rather than A-Levels. It suits my style of learning.

"BTEC courses are based on assignments rather than exams which are basically memory tests. The assignments were tough, particularly when you have to write them in a language that is not your own.

"There were times when I was so far behind with my assignments that I locked myself in my room and did not leave until I had finished. I only wanted to be the best and to aim as high as possible.”

"My teachers were brilliant," he added. "They were dedicated and really wanted me to succeed in life. They pushed me to get the best possible grades." 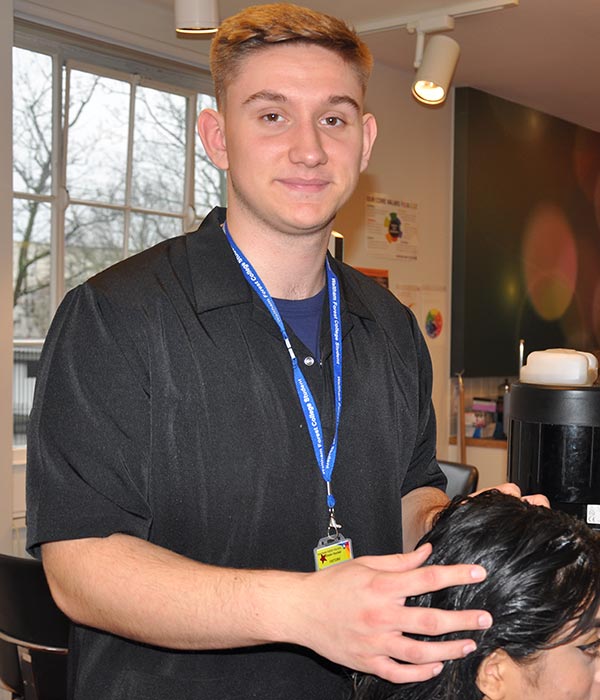 Level 2 Hairdressing student Oliwier Opolski, was offered a paid position at ‘The Salons’ in Walthamstow Village after impressing salon owner Paul Miller, on a one day work trial.

Oliwier decided to enrol on a Hairdressing course at Waltham Forest College in September 2015. Prior to enrolling he had no idea where he wanted to take his career and little to no experience in Hairdressing.

Shortly after the course commenced, Oliwier began to advance and develop new skills which soon became apparent to his peers and tutors.

Oliwier lives at home with his mom who is a single parent. Though he loves his course, he also wanted to help out at home financially, but was uncertain of how to do this whilst studying full-time in college.

After sharing his concern with his tutor, who then liaised with the Commercial and Business Development Team at the College, Oliwier was offered a placement at ‘The Salons’ in Walthamstow Village.

Salon Owner Paul Miller, who has worked with Celebrity Stylist and Hairdresser Nikki Clarke, was so pleased with Oliwier’s performance that he asked him to return for paid work along with additional training and support on Tuesdays and Saturdays.

Oliwier, will also be progressing on the Level 3 Hairdressing as an apprentice at ‘The Salons’ in April.

He said: “It’s a dream come true to be working for an employee like Paul Miller who has so much years of experience under his belt. I’m truly looking forward to progressing on the Level 3 course as an apprentice in his salon.”

Fatima Jada, Learning Manager for Hair & Beauty said: “Oliwer is a dedicated and ambitious student who possesses excellent employer skills. He has proved to be the perfect candidate for the job.”

For information about apprenticeships at Waltham Forest College, email apprenticeships@waltham.ac.uk or call 020 8501 8074. Alternatively, visit the Open Events on Saturday 6 February 2016, 10am – 1pm. The College welcome all enquiries from employers, parents, and students.