Description of the Original Building and Grounds 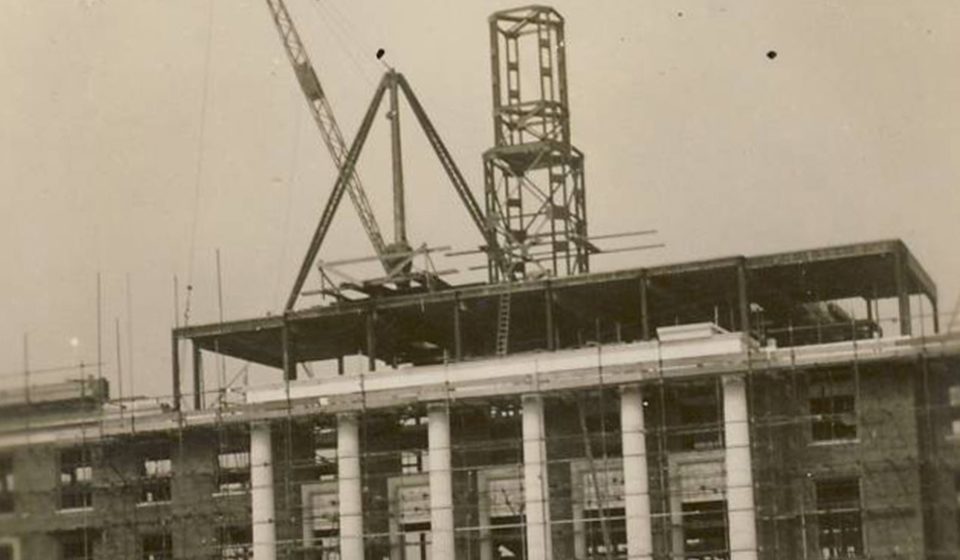 The College site has been updated many times over the past 80+ years. Upgrades to the main building have been necessary for both general maintenance and to ensure an up-to-date learning environment. The most notable changes are the late 2000s and early 2010s ‘Heart of the College’ upgrades, a series of multi-phased and multi-million pound conversions to key sections of the College. New buildings have also been added to the campus to help with increased student numbers and to reduce the expense of satellite facilities by bringing teaching back onto the one site.

It is, however, interesting to know what the College was like when it was first built and to explore mysterious changes that, in some cases, appear to be undocumented. To ensure historical accuracy, much of the following information has been directly copied from the Official Opening brochure from 1939 and an article written by The Guardian on 9th July 1937.

The College sits next to the London Borough of Waltham Forest’s Town Hall, now being developed into a new community and housing centre. When the College was first being built, the Civic Centre, as it was then known, was also under construction. To ensure the buildings didn’t clash with each other, Mr John Stuart, F.R.I.B.A., Essex County Architect worked closely with the architects of the Town Hall.

The College, facing south, is set well back from Forest Road. The building, which is E-shaped in plan, covers an area of two and a quarter acres, and the length of the main corridor, which runs around the basement, is almost one quarter of a mile. In the early days, the north side housed two gymnasia with the engineering workshops joining from the central part of the building (at ground floor level only) to create a rectangle. This then gave space for two large quadrangles that were used as playgrounds for the Day Schools.

The site’s location has a natural disadvantage in the terrain. The land falls sharply away from Forest Road making the College’s ground floor sit much lower than the houses opposite. As a result, the modern day second floor, which is accessed via the main front steps, aligns with Forest Road. When opened, the current second floor was referred to as the ground floor and the current ground floor the basement. To overcome the steepness of the slope the front courtyard was designed as a series of terraces and lawns. 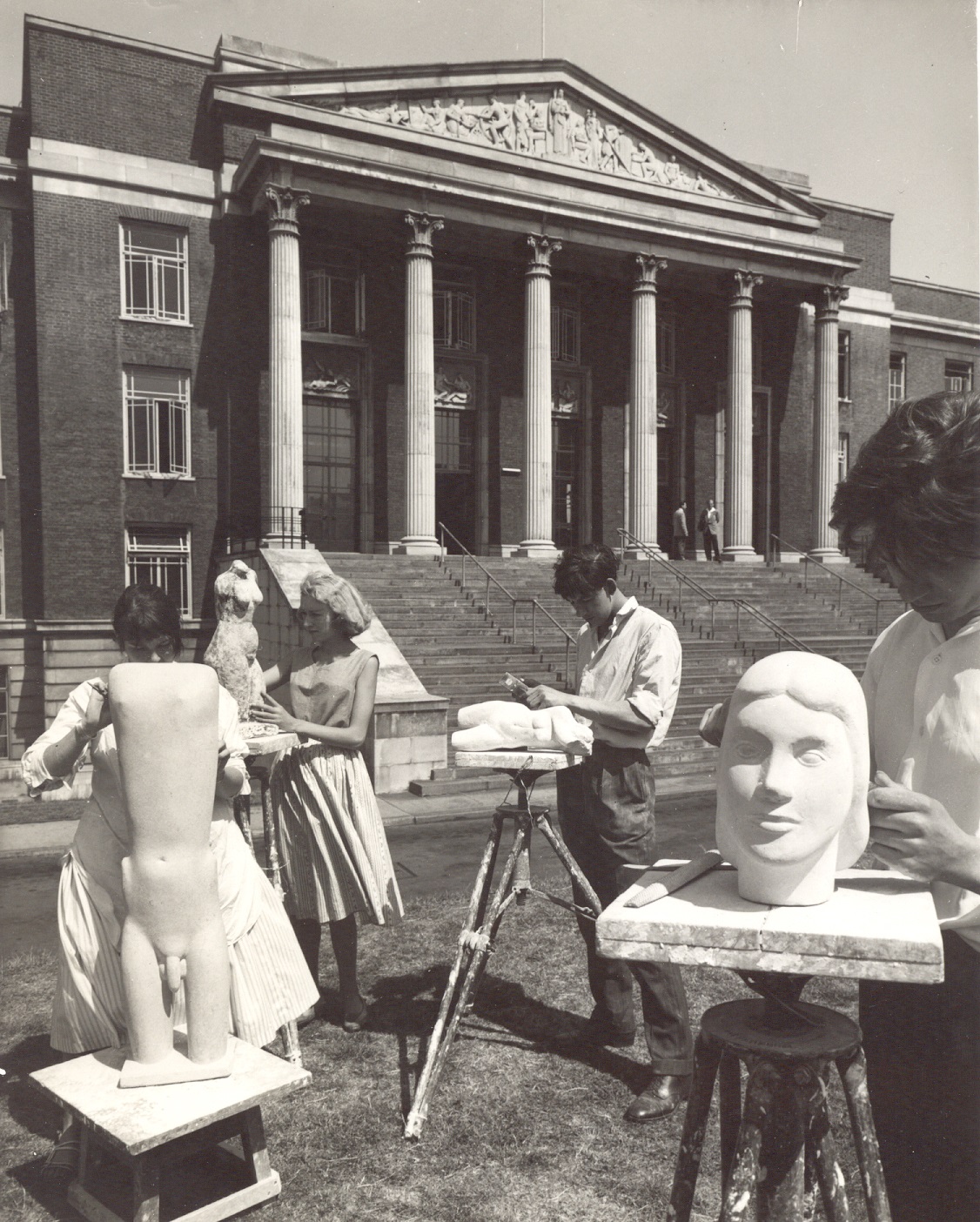 The courtyard was originally built with one stadium-shaped driveway looping around to the College main stairs before looping back to the site entrance. There was lots of green space for students to enjoy and, in some later photos, students from art courses can be seen sculpting and painting. This changed over the years to include more pathways and, later, as automobile transportation became increasingly common, car parks were added to the east and west of the driveway removing a large amount of greenery. Green space and seating can still be found in the centre of the driveway.

The College is a four-storeyed building, designed in the Georgian style, faced with multi-coloured bricks that contrast with the rusticated plinth, cornice and window dressings. The central feature of the main south elevation is an artificial stone portico over the main entrance, supported by six Corinthian columns and surmounted by a pediment. A bold flight of steps takes you up through the main entrance vestibule to the Exhibition Hall (now referred to as the Reception). There were also two secondary entrances, each half-way along the east and west wings, these were designed to help ease circulation. The two secondary entrances are rarely used now and open into offices, however, during the Covid-19 pandemic the west wing door was used as part of a one-way system during the 2020 summer enrolment.

The main entrance was originally intended to be surmounted by a clock tower, the frame of which can be seen in original photos, however, for unknown reasons, this was later removed. Rumours over the years have suggested it was removed at the start of the war. Another story is the Borough Council objected to the College’s tower on grounds that it detracted from the new Town Hall’s appearance. In compensation, the council supposedly provided the steps from the main road down to the foot of the main steps (Fiftieth Anniversary Waltham Forest College, 1988). 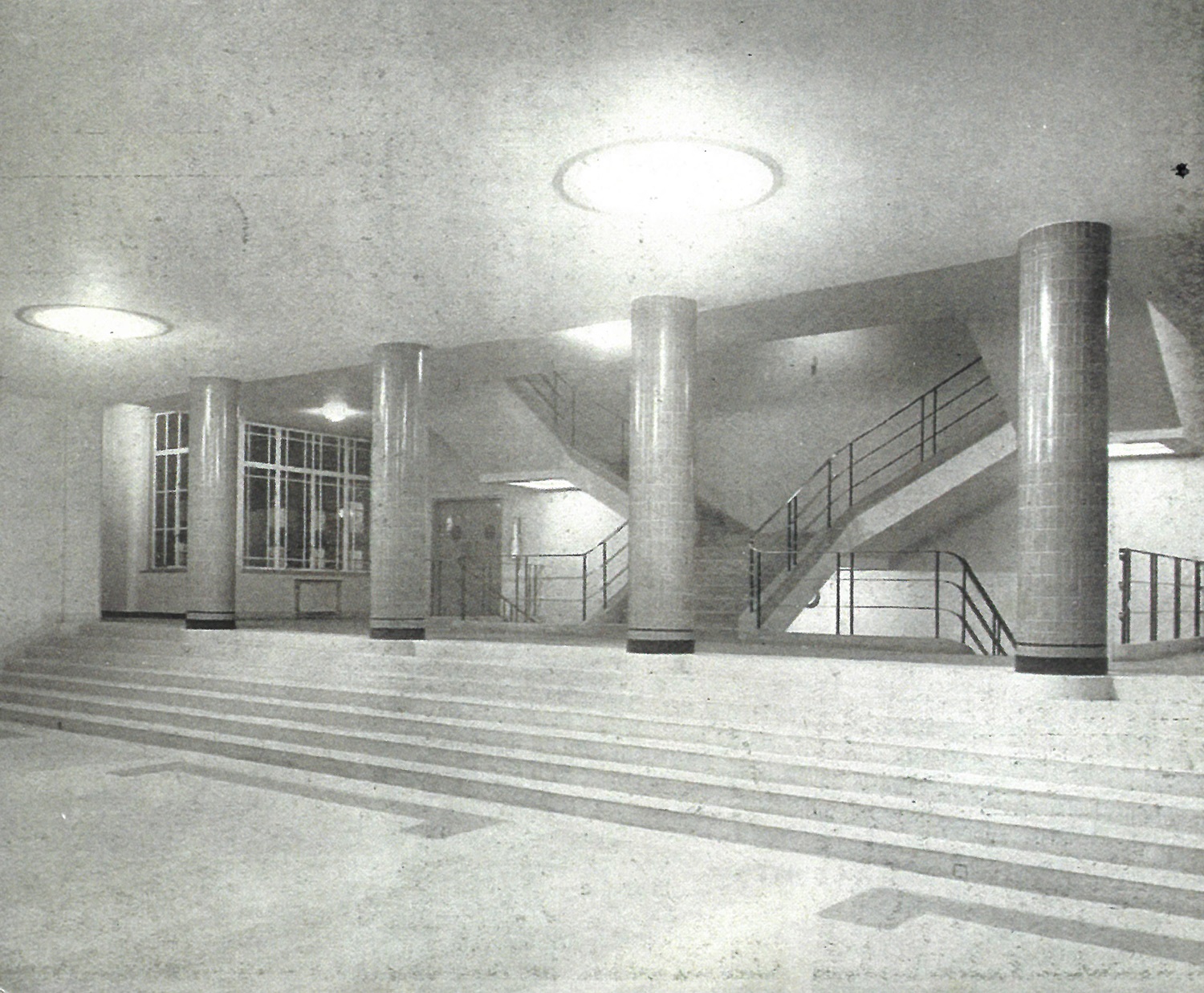 The Exhibition Hall was originally designed with a biancola floor, with walls finished in buff glazement. The shallow flight of steps, which still remain, led through four tiled columns to the central double staircase, on each side of which are the entrances to the Assembly Hall (now the Learning Resource Centre). The Principal’s room was the fifth on the right and had polished mahogany furniture with Van Gogh reproductions. To help with the flow, the building was designed with two lifts and four secondary staircases, one at each corner of the building. 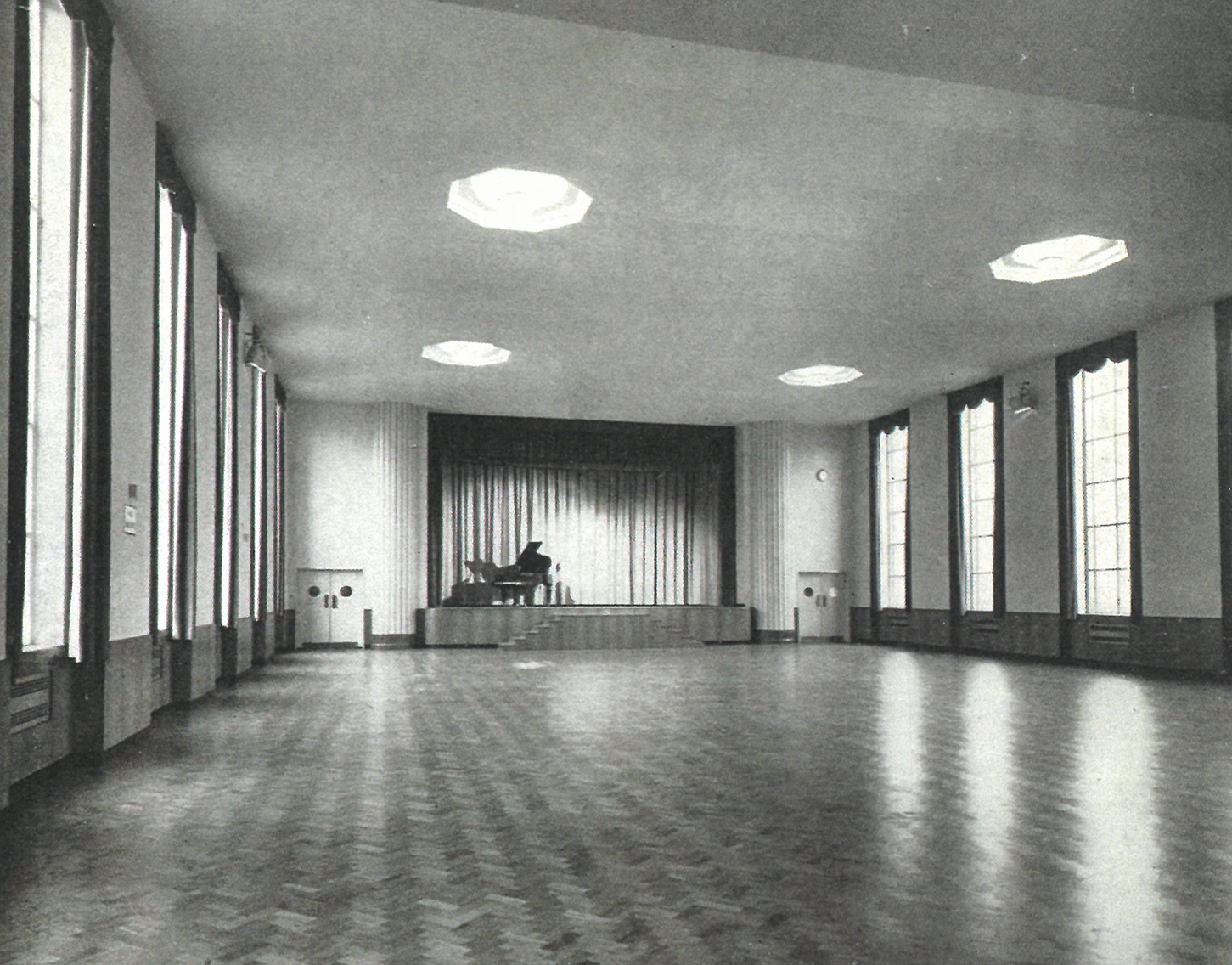 The Assembly Hall was a large space originally designed to seat over a thousand people and, as was discovered in 1938, could hold 2000 people standing, albeit in very cramped conditions. The stage, which still gets sporadic use, sits at the north end and was designed originally with three curtains and a lighting installation “to delight the heart of the most exacting producer”. The dark floor was of Rhodesian mahogany which contrasted with the dado of Indian silver greywood that framed it to sill height. Above, the walls were painted and stippled, and the ceiling of stretched canvas was treated acoustically. Ornamental metal grilles recessed in the walls concealed electric heating elements.

Classrooms and other learning areas were finished in accordance to their use. Floors were finished in a variety of materials including, Rhodesian teak blocks, oak and Columbian pine boarding, rubber, linoleum, smooth-surface cement and grano, with distempered walls and ceiling in a variety of colour schemes. Along the outside wall of the east and west wings lines of lockers were installed to windowsill height. There were also eight cloakrooms, two on each side of the four main floors. There was also a series of things that we take for granted today, including, an internal telephone system, special bell and fire-alarm systems, fire-fighting appliances and electric clocks throughout the building. 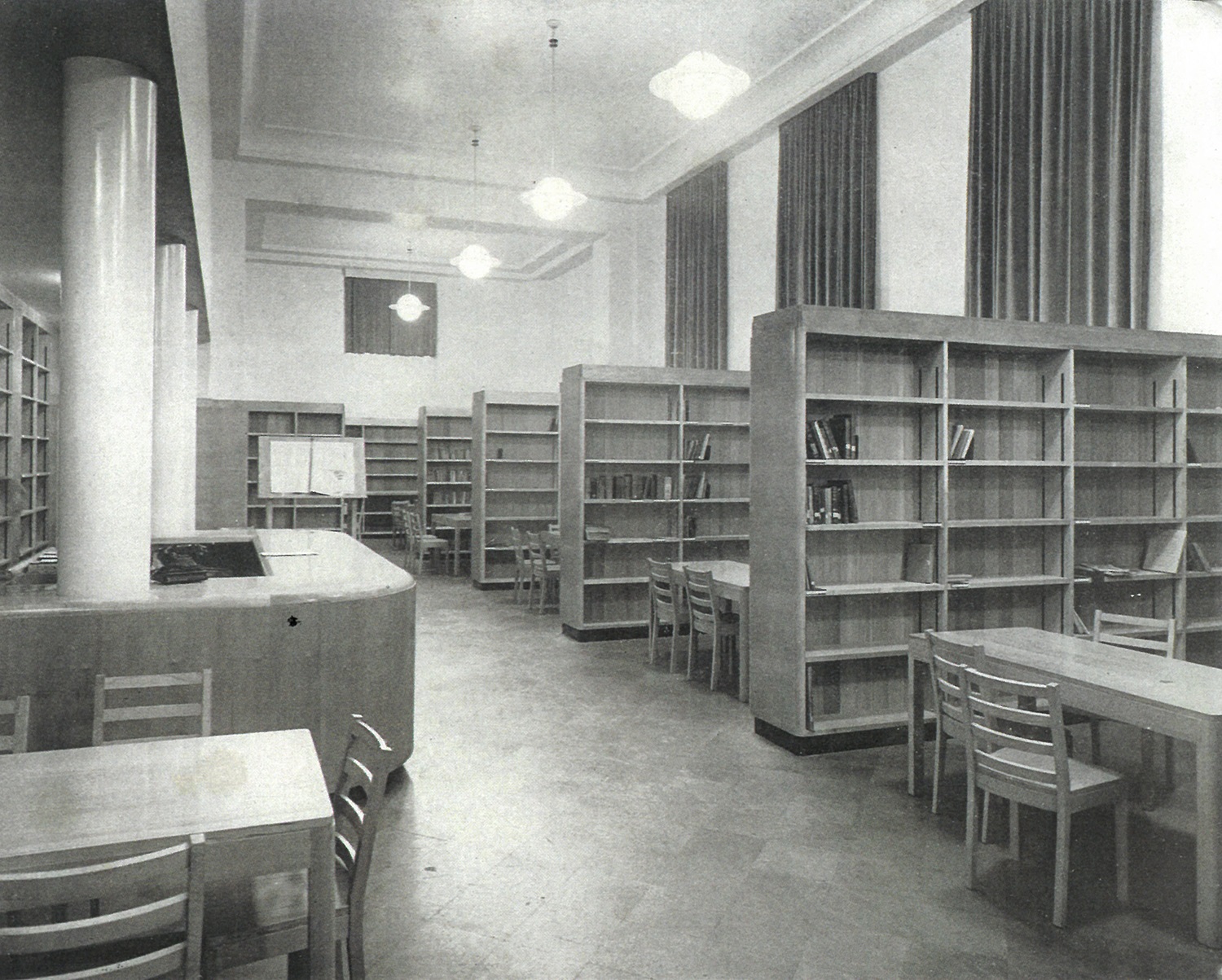 The Library, which is now the Student Common Room, was fitted with bookcases built from weathered sycamore and tables and chairs in polished beech. Above the bookcases the walls and ceilings were painted and stippled to tone with the woodwork. The room also sported a cork-tiled floor, electric heating, rose velour curtains, and “carefully designed lighting to ensure students could read in comfort and silence”. There were separate sections for students and staff doing research and those browsing periodicals.

In complete contrast with today, the College had separate Common Rooms for men and women and separate men’s and women’s staff rooms. The common rooms were fitted with furniture built by Papworth Industries, a part of the Papworth Village Settlement, a settlement for sufferers of tuberculosis, which later broke up and became Papworth Hospital in Cambridge and Papworth Trust, a charity that aims to support disabled people to have equality, choice and independence. 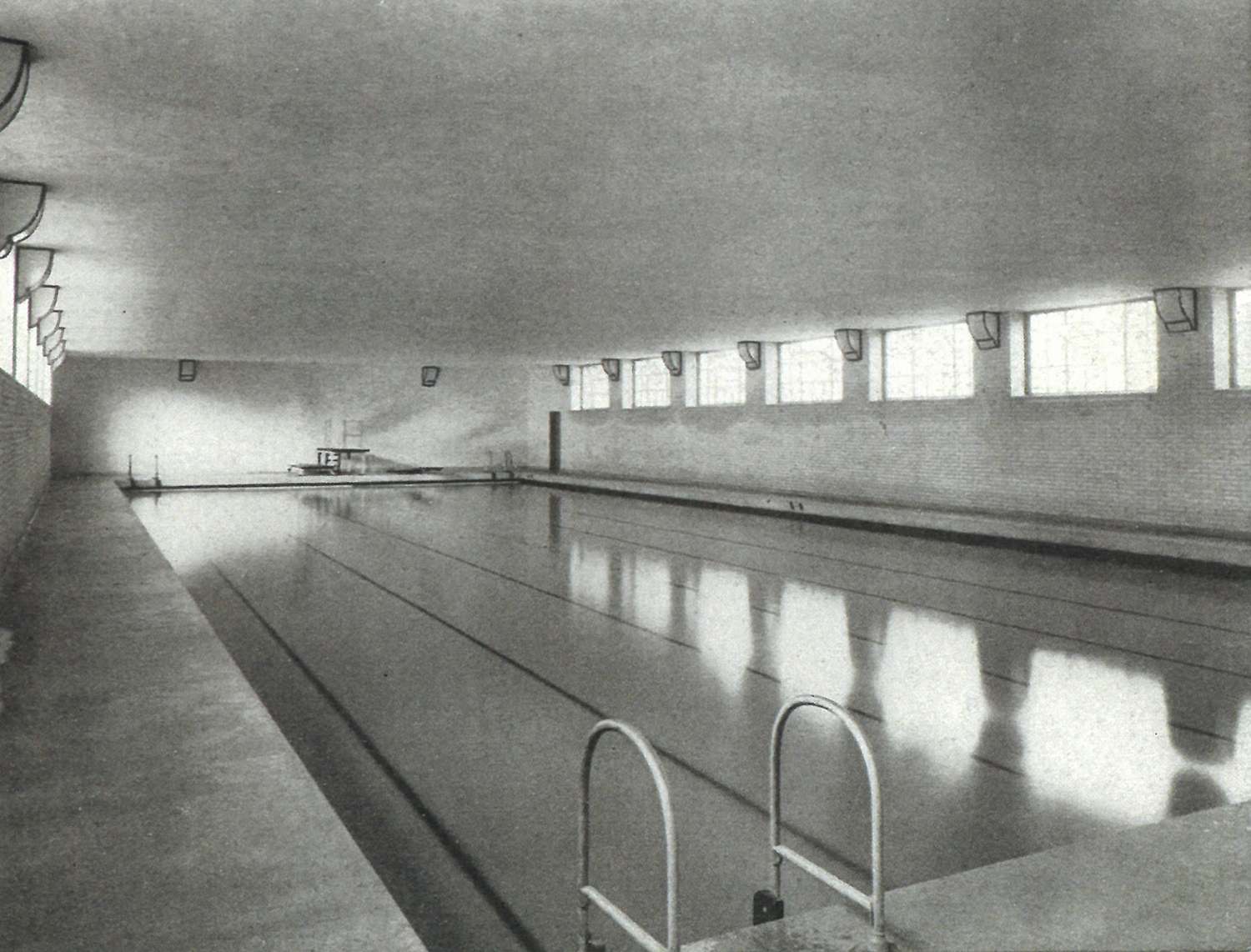 Another grand feature of the building was the Swimming Bath (now pool). The pool still exists today although is currently unused. It has a water area one hundred feet long and forty-two feet wide, which was designed to allow for seven swimmers side by side. The pool was fitted with springboards and a diving stage and had ceiling lights. The pool’s lights, as of the lights throughout the College, were selected and installed after consultation with experts from the National Institute of Industrial Psychology. 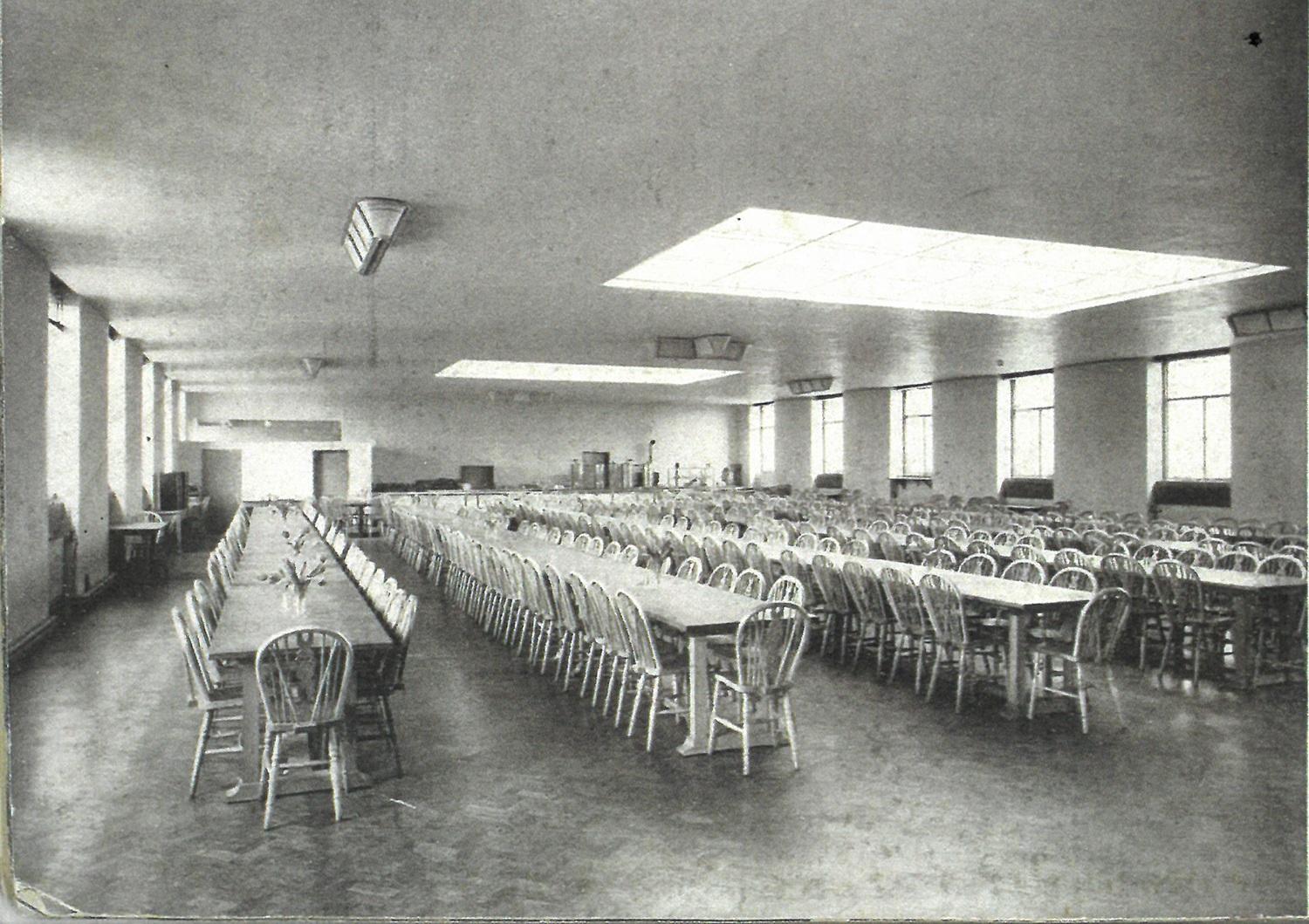 Finally, in the central section of the building, the only section that has a fourth floor, is the Refectory. This has moved locations over the years, as can still be evidenced by old signage outside the current sports hall, but has been reinstated back to the main building’s fourth floor. The Refectory, which was designed with natural side and top lighting, was one hundred feet long, fifty-five feet wide, and twelve feet high, and could provide a cafeteria service for four hundred students at a sitting. That number has reduced since the Heart of the College upgrades and conversions due to the introduction of more classrooms before you access the cafeteria. The walls and flat ceiling were originally finished in sprayed texture distemper. The adjoining kitchen, which is still served by a lift that connects with the stage, various stores and the caretaker’s flat above, had gas, steam and electric equipment to suit its needs.