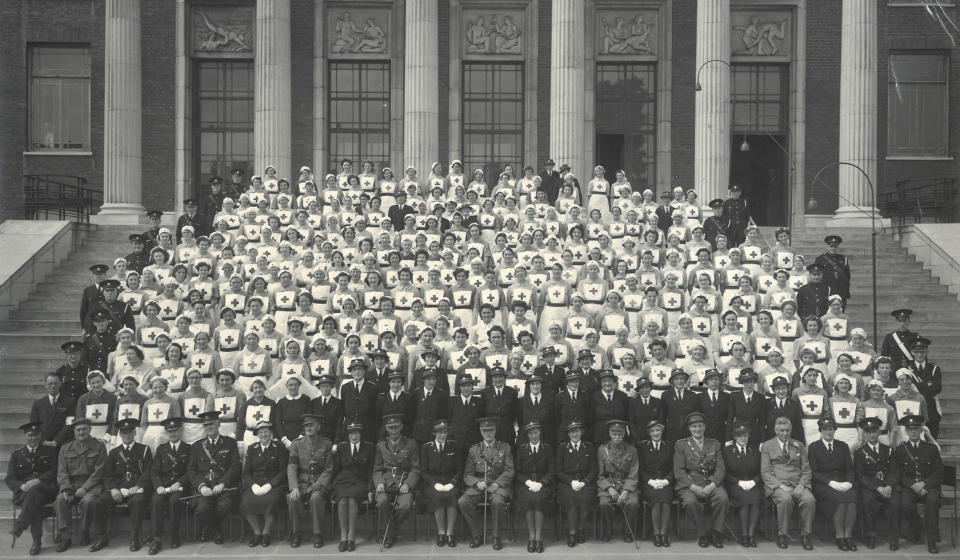 The College’s Red Cross Detachments proved to be a valuable local resource to the community and aided the war-effort with civil defence, hospital duties and social work (Lowery, 1941, p.11). The Women’s Detachment not only gave direct aid to the community but became a training group in their own right by delivering first aid instruction to youth groups and factories under guidance from Mrs Petigree who oversaw first aid work. Further work the Women’s Detachment oversaw was the after care of Servicemen discharged from the military on medical grounds and of returning prisoners-of-war (Bray, 1947, p.91).

The Men’s Detachment often worked in co-operation with the Women’s on many services, however, they also provided specific duties such as dealing with accidents at fetes, processions, football matches and other gatherings. Many men volunteered to be stretcher bearers to meet emergency hospital trains and helped in local hospitals and with Air Raid Precautions (ARP).

Shortly after the first arrival of Servicemen to the College for training, a Sick Bay was established in the basement (now referred to as ground floor) of the College. This was overseen by Mrs Brazier and Nurse Bowers, who was replaced a few months later by Nurse Dawson. The number of people treated in the College Sick Bay from January 1940 – January 1946 is astonishing. 19,822 patients were treated, of which 16,907 were members of the armed forces (Bray, 1947, p.93).

W.R. Bray (1947, p.93) pays tribute to Nurse Dawson “for her ever cheerful personality and her never stinted help to those in need”. Nurse Dawson was awarded the British Red Cross (BRC) Medal in 1943 for saving of life by the ‘Prompt Rendering of First Aid’. The medal was presented by the Duchess of Gloucester.

On occasion, the College was host to the Red Cross Detachments in South-West Essex for several rallies and visits. One notable occasion was 24th June 1945 when the Detachments were reviewed by Colonel Sir Francis Whitmore, K.C.B., C.M.G., D.S.O., T.D, Lord-Lieutenant of the County, and Lady Whitmore, President of the Essex Branch of the British Red Cross Society (Lowery, 1945, p.18).

In addition to Sir and Lady Whitmore, other visitors included:

The work of the detachments and their leaders was recognised on at least three significant occasions. Firstly, after taking over leadership of the Women’s Detachment from Miss McKechnie, Mrs Brazier later became a Divisional Secretary and was invited to 10 Downing Street to have tea with Mrs Churchill. Secondly, in early 1946 she was awarded the Distinguished War Service Certificate of the BRCS and attended a ceremony at Buckingham Palace at which she was presented her certificate by Her Majesty the Queen (Bray, 1947, p.93). Thirdly the Men’s Detachment work was recognised when the Commandant was invited to be one of the Guard of Honour for the Princess Royal on the occasion of the Annual Service of the British Red Cross at Westminster Abbey in early 1946 (Bray, 1947, p.92).

In the 1944-45 report, the College Detachments “expressed to the Governing Body their appreciation of the facilities they have continued to enjoy in the college in connexion with all their activities, and which have helped so much to maintain the good standard of training and efficiency” (Lowery, 1945, p.18).

The Beginning of the Red Cross. Available at: https://www.redcross.org.uk/about-us/our-history/the-beginning-of-the-red-cross (Accessed: 28 December 2020).