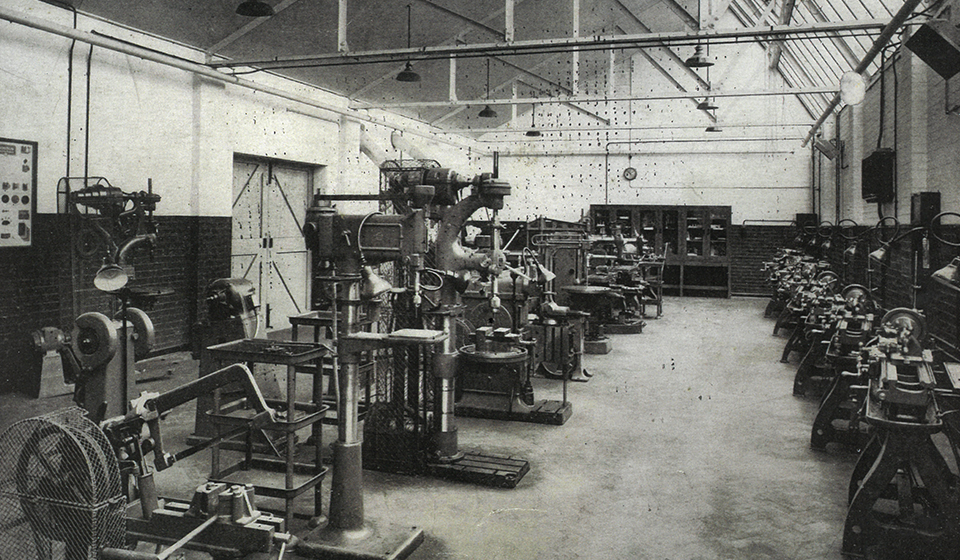 As is true with Waltham Forest College today, technical education in the early years relied upon constant discussion with local and national industry to ensure the training students received was beneficial and relevant. Some organisations, such as the Red Cross and Women’s Voluntary Service (WVS), have already been mentioned in other articles and have shown how dynamic the College and country were at the time in adapting to the needs of the community. This article explores how the College, and education in general, was just as agile when dealing with business and industry.

During the war years, the South-West region of Essex didn’t have a predominant industry, rather a large collection of firms involved in light engineering and associated trades. However, there was, at the time, a relatively young Plastics Industry, of which several household names had factories close to the College (Bray, 1947, p.68). It’s this proximity that led to a Plastics Technology course being taught by the Science Department in 1941-42. In anticipation of large post-war developments in the industry, the College established a Plastics Advisory Committee in the 1942-43 academic year (Lowery,1943, p.20).

Representatives on the Plastics Advisory Committee were:

Members of the College Governing Body:

In the same year, it was formed, the Committee put forward proposals for the College to equip a plastics laboratory and workshop. This was not possible immediately due to lack of space and machinery as a result of the war, but plans were put in place to expand when possible to ensure “that the College will be in the forefront of educational developments connected with this rapidly growing new industry” (Bray, 1947, p.69).

It wasn’t until the 1947-48 academic year that the College was able to obtain enough large-scale equipment to open a plastics laboratory. Up until that point students had made use of workshops and laboratories at De La Rue and British Moulded Plastics.

EAW courses were provided at the College for students, primarily female. W.R. Bray (147, p.68) mentions, “The absence of men from the home during the war years greatly stimulated the interest of women in electrical matters.” As a result of this interest, the EAW opened a new branch at the College in early 1945, the only new branch to be opened during the war.

BUSINESS AND INDUSTRY MANAGEMENT AND ADMINISTRATION

The country saw a rapid expansion of factory workers during the 1940s. This expansion led to a need to recruit more supervisors. The Government found that there weren’t enough people to fill these positions and began promoting workmen from the factory floors. Although these men were skilled at their job, they had no experience in management, so something needed to be done.

Across the country colleges, including South-West Essex Technical College, began running short intensive evening courses. These courses ran over 3 months and allowed workers to continue their day-time jobs while studying. The College’s courses were run by the Commerce Department with some part-time specialists appointed to assist. The contents of the courses included, factory organisation, planning, personnel management, costing and factory legislation (Bray, 1947, p.70).

A positive nationwide repercussion of the College’s courses involving business and industry started with a problem encountered in 1942. Lecturers often found difficulty in carrying out their classes because the students were so eager to discuss various questions at length. This issue continued to arise, so it was decided to set aside an evening for discussions of this nature. As a result, a local group called the North-East London Supervisors’ Discussion Group formed based at the College. In a few months, more groups were appearing over the country (Bray, 1947, p.71).

The Electrical Association for Women. Available at: https://www.wes.org.uk/content/electrical-association-women (Accessed: 30 December 2020).