Waltham Forest College is amongst a handful of organisations that have not made the new register for the Office for Students which acts as the regulator for the higher education sector in England.

The College which serves predominantly the north east of London attracts just under 5000 learners per year and has a small but growing provision for higher education with a current cohort of 56 students.

After an exhaustive waiting period, a final decision was shared with the College and was notified as the next casualty in OfS’s new registration process.

Data as far back as 2014 was used to form the final outcome. Unfortunately, the college was still on the road to improvement at that time. With key changes in leadership appointments over the last four years, Waltham Forest College has demonstrated a consistent improvement in the achievement of its students since 2016, with achievement for HE reaching the highest this year at 90%.

Principal, Dr. Joy Kettyle said; “Whilst our higher education provision is small, we are disappointed with the final outcome. The London Borough of Waltham Forest is very diverse ethnically and socially and amongst the top 10 per cent most deprived in the country, the OfS have failed to fully appreciate the challenges some of our students face and their personal journey to overcome them”.

Dr. Kettyle said “Our achievement rates this year is something we are proud of and we remain fully committed to supporting our students in making the transition onto other institutions to continue higher levels of study”.

The College held its 16th Graduation Ceremony on the 11th July and the auspicious occasion transformed the campus into a lavish venue, attended by friends, family members, College governors and staff.

Students shared their stories on how they overcome personal barriers to learning and how the College has supported their journey to pursue the next stage of their career.

Students’ Union President and valedictorian, Nancy Kuforiji delivered a powerful and emotional speech, she said: “This is not just a graduation ceremony but a dream that has taken me 15 years to pursue. Unfortunately, I never had this opportunity when I was younger for reasons beyond my control. Waltham Forest College gave me a second chance to improve my life-chances and today I can confidently look back and say it was one of the best decisions ever.” 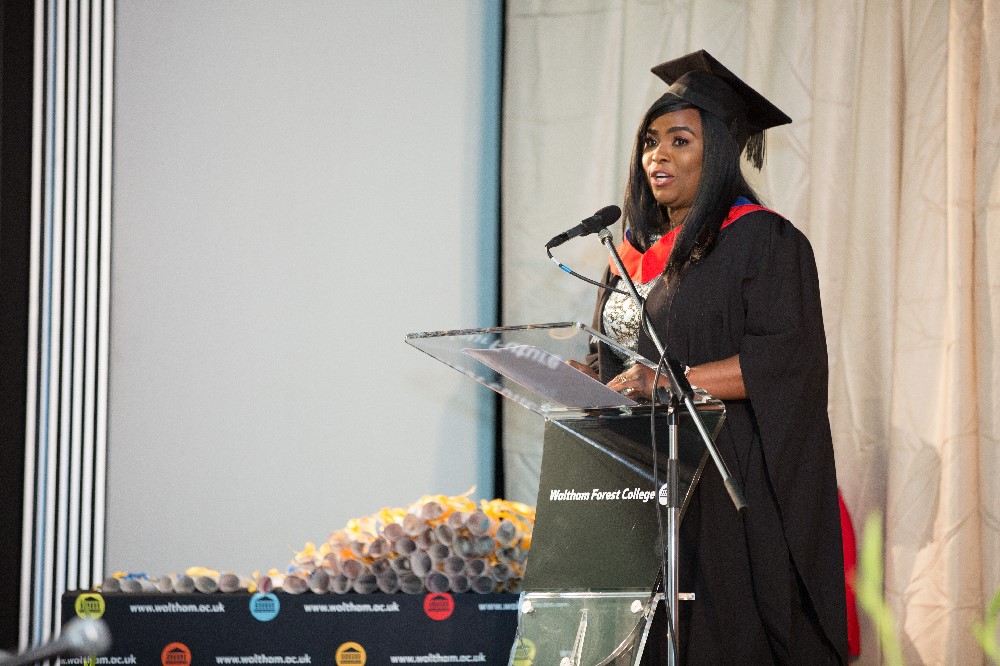 Nancy concluded her speech by saying: “Congratulation to all of us all for making it this far; also a greater well done on the ability to bounce back on your feet despite all the obstacles and challenges faced when making that crucial decision to further our education”.